These are my notes from Dr. Dominic D’Agostino’s presentation on the therapeutic use of Ketosis at a Bioceutical’s workshop in Melbourne on October 28th, 2019.

It offers a deep dive into Ketosis, its uses and practicalities and contains many pearls of wisdom. Any errors, misrepresentations here are of course, solely my fault. I’ve tried to keep my words to purely what was said by Dominic.

Ketone bodies are derived from fat either from our diets or from burning fat from our fat stores. It takes around 24 hours of fasting to enter into nutritional ketosis (intermittent fasting may be healthful but not long enough for ketosis). Ketosis is possible through diet, supplemental Keto Esters or salts, or fasting.

Switching the body’s pathways fully from glucose to ketone bodies usually takes two to three months (keto adaptation). Then fat oxidation enzymes, ketogenesis etc. are up-regulated. When in ketosis, people usually have a better control of appetite, and ketones give more energy per unit of input than sugar (glucose).

Diabetic keto acidosis is a consequence of insulin deficiency and results from high glucose and high ketones. It is very very rare in people who don’t have Type I diabetes as they have lowered blood glucose.

There are two main ketone bodies: acetone, and Beta-HydroxyButyrate (BHB). BHB is the most abundant (78% of all ketones in the body), and is the one measured by blood tests using handheld meters and is also available as a supplement. However, both of these ketone bodies are important.

The keto diet is unique in that the diet’s effectiveness to alter blood chemistry (ketone bodies) is directly measurable at home.

The ketogenic diet may not be recommended if you have liver issues. NASA were concerned about possible kidney stones, but this should not be an issue if you stay hydrated with electrolytes, particularly magnesium, potassium, and sodium.

Keto diet may be recommended for Glut1 deficiency and may also help (prevention, treatment?) Alzheimer’s disease (as Alzheimer’s is talked about as Type 3 diabetes). A keto diet also converts the excitory neuro-transmitter Glutamate (which may be elevated in Alzheimer’s) to the calming neuro-transmitter, Gaba. This may be way the diet can also reduce anxiety.

Dominic’s wife observed mice were less anxious when handled when on the ketogenic diet and investigated this phenomenon. When the rats were observed in a maze, they showed more exploratory behaviour and less fear in open spaces, indicating a reduction in anxiety on a ketogenic diet.

When insulin is lowered, we excrete more sodium and therefore water and so taking in enough electrolytes is important. BHB Keto salts that are bound to Magnesium are good (such as Bioceuticals brand) as they also give you extra Magnesium which you are body be deficient in on a keto diet.

Gradualy increase dose of MCT in teaspoon increments. It should be possible to increase four of five fold. Dominic has been able to consume 150ml before digestive discomfort by gradually increasing the dose. He’s also been able to get a reading for blood ketones of 1.0 mmol/L from MCT oil alone with a higher Carb diet. MCT powder is often better tolerated than MCT oil.

Ketone bodies can be consumed as a supplement and they increase blood ketone levels measurably. Most of Dominic’s lab’s work has been using Ketone Esters but Ketone Salts (BHB) are also effective.

When supplemental BHB is combined with MCT powder, it slows gastric emptying so that ketones are released slowler.

Dominic has observed that supplementing Ketone bodies can cause blood ketone bodies to drop below baseline for a short while after two or three hours as ketone production is downregulated. However, when they are consumed with food, they lower inflammation, lower blood glucose – demonstrating increased fat burning.

Some people eat high fat cuts of meat to create a Keto Carnivore diet, and some demonstrate impressive blood work including cardio-metabolic markers, and claim auto immunity and gut issues have been cured. This may be due to avoiding anti-nutrients in vegetables such as oxalates. However, Dominic talked about hormesis – how these anti-nutrients can make us ‘stronger’. He commented the diet is unnecessarily restrictive.

Carb cycling is good in theory (unless you are using the diet to treat epilepsy in which case you always want ketosis). It may only take 24 hours of increased carbs to increase T3 hormones which may have been suppressed. Dominic prefers to increase Carbs for one meal only, rather than for whole refeeding days. He would cap Carbs on those days to 100-150g. Also, remember that if you are in Ketosis, your glucose transporters may be downregulated and you may be less able to deal with the carbs – so don’t overdo it!

LDL cholesterol in the first weeks of beginning a Ketogenic diet. LDL can be lowered by decreasing the amount of dairy fat in the diet, replacing some saturated fats with mono-unsaturated fats. Link between LDL as a single marker and heart disease risk is questioned.

Dominic’s second presentation was on cancer prevention and treatment which I will include in a seperate post.

Stephen Ward is a qualified Nutritionist and Functional Medicine practitioner. 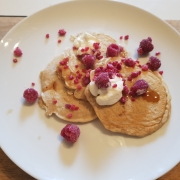 How good is your first line of defense?

Why are my iron levels still so low?
Scroll to top